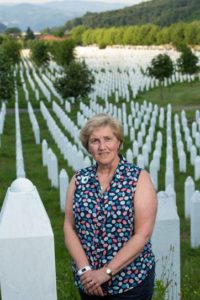 One of the  greatest gifts that human beings have is the ability to recall events and places. Memory allows us to turn back the clock. At times of bereavement it can be comforting to hear again a loved one’s voice, laugh again at a joke that was enjoyed or take comfort from a word of encouragement that was offered. Memory of course also reminds us of difficult times that caused us pain and tears. As we come to the 24th anniversary of the Srebrenica genocide on the 11th of July when over 8000 men and boys were systematically massacred and thousands of women and girls were subjected to acts of sexual violence the memories that the mothers and survivors have are clouded with so much grief & sorrow. Memories for them which come not just at memorial times but live with them every day of their lives.

Marking this event with a moment’s silence, lighting a candle or saying a prayer from your faith community shows solidarity not only with our friends in Srebrenica and the surrounding villages and towns but also with the Bosnian community here in Scotland. Yet marking is not enough. We must endeavour to fight racism and hatred wherever we encounter it only then will we be able to truly say never again.