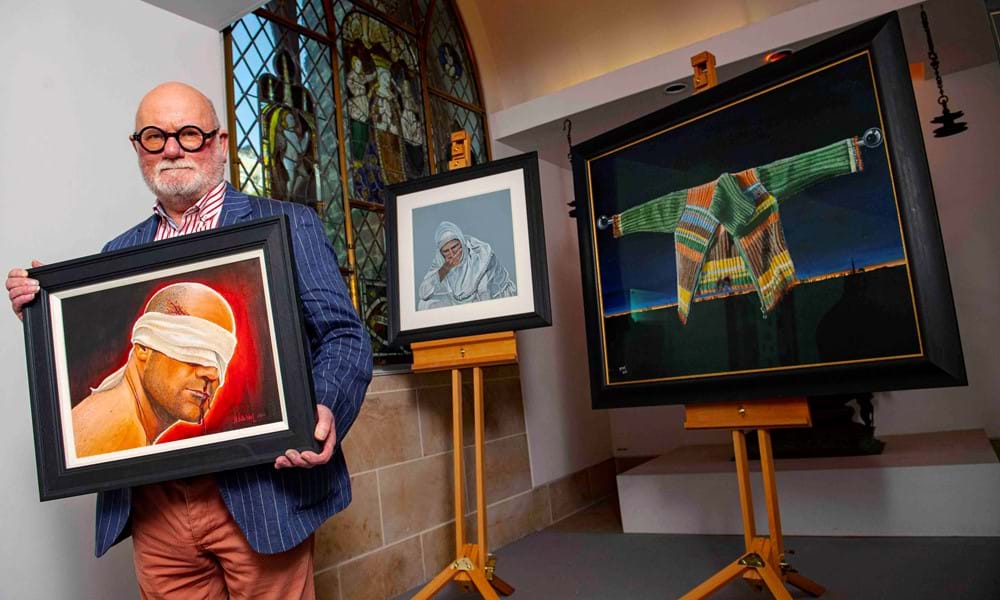 Remembering Srebrenica Scotland, Trustee Robert McNeil MBE, has unveiled three of his paintings in a new exhibition at St Mungo Museum of Religious Life and Art in Glasgow.

War and persecution motivated by religious and ethnic hatred continue to force hundreds of thousands of people from their homelands. Over the years many have sought sanctuary in Glasgow and we are proud of our record of welcoming refugees from across the world. Robert’s evocative paintings will resonate with anyone who has empathised with those who have experienced the trauma of fleeing war and oppression. On a recent visit to Bosnia, I was deeply affected by meeting the victims and relatives of those massacred in the 1995 Srebrenica genocide and those caught in the Sarajevo siege. I hope this exhibition will raise awareness of the need to recognise prejudice, extremism and exclusion and the hatred it creates. The St Mungo Museum exists to promote understanding and respect between people of different faiths and those of none. We are very grateful to the National Fund for Acquisitions for helping Glasgow Museums acquire these paintings and create this new display.

I hope having these works on display at St Mungo will highlight and continue to raise awareness of religious persecution and ethnic cleansing across the world. We must learn from past horrors and make sure that younger generations are aware, not just about the history of the genocide in Bosnia, but how to recognise the signs of intolerance and the violence it generates wherever in the world it occurs and take action to persuade those in power to end it.

Although he never formally trained as an artist Robert McNeil has felt compelled to depict his experience in Bosnia through painting, his works present the challenging themes of loss, grief and the scientific processes involved in conflict zones.

Robert’s work was first publicly displayed in I.O.T.A, Glasgow, closely followed by an exhibition of 12 works entitled ‘Witness’ shown at the Mitchell Library in 2014 and the Scottish Parliament in 2016. Glasgow Museums first encountered McNeil’s work at a Holocaust Memorial Day Training Day in 2015 through his involvement with the charity Remembering Srebrenica Scotland of which he is a Trustee.

Remembering Srebrenica Scotland is a Scottish Educational Charity dedicated to commemorating and raising awareness about the Srebrenica genocide and its legacy. It is about to launch a major new schools and youth programme

‘Witness’, 2012 Acrylic on board. Signed, mounted, framed and glazed. This work demonstrates what forensic science can teach us about the circumstances of a person’s death and in this case the way thousands of Bosnian men and boys were blindfolded prior to being tortured and shot. McNeill used his own son as a model for this particular work. Robert said: ‘At first the forensic team thought that blindfolding the victim was a bizarre act of humanity. It was later discovered, through eyewitness testimony that the victims were blindfolded to help keep them quiet as they were led to their deaths.’

‘Subjugation’, 2017 Oil on canvas. Signed, framed and unglazed. This work represents the forensic investigation into crimes against humanity in Kosovo in 1999 where clothing removed from human remains was washed and laid out on the ground for relatives to identity. Robert said: ‘A woman on seeing a jumper hanging on a rail to dry collapsed to the ground in tears. She recognised it as her husband’s jumper. She appealed to us to allow her to take the jumper home. We didn’t have the heart to say ‘no’. She clutched it to her body as she left the mortuary, supported by members of her family. I wondered if the woman would notice the bullet entry point around the heart area and the exit point in the lower back area, indicating that the victim may have been forced to his knees (or perhaps in prayer) when he was killed.’

‘Srebrenica Woman’, 2010 Pastel on paper, signed, mounted and framed and glazed. This is a harrowing work and captures the very moment when a Bosnian Muslim woman is confronted by the grim reality of her husband’s death by positively identifying his clothing. Robert said: ‘The woman came to the mortuary to identify the clothing of her loved one, missing following the massacre of over seven thousand men and boys from Srebrenica. I dreaded these ‘identification days’. The women on recognising clothing become inconsolable as they realised that their menfolk were dead, instead of being at work camps as they had hoped.’

You can also read coverage in The Sunday Post, Glasgow’s Evening Times, Asian Image, The Times’ Week in Pictures, STV News and listen to radio coverage on BBC Radio Scotland at 1 hour 20 minutes in.