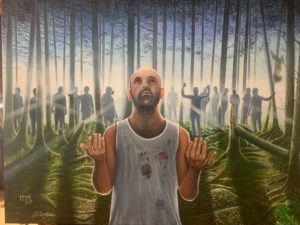 ‘Blinded by the Light.’ On this day 24years ago thousands of Muslim men and boys from Srebrenica ran into the forrest to escape certain death by Bosnian Serb soldiers. As they made their way to Tuzla, 40 miles away through mine fields and shelling, they were confronted by soldiers wearing Dutch UN uniforms shouting to them to come down saying they would be ‘protected’. The soldiers were Serbs wearing UN uniforms stolen from the Dutch peacekeepers who were being held hostage. The man in the foreground is praying for guidance. Those who were tempted from the forrest were immediately executed and thrown into mass graves. Only a few of those who went on the ‘death march’ to Tuzla survived.

I painted this as a tribute to those who died and those few who survived.