Our Vice Chair Robert McNeill has revealed his latest painting, days after war criminal Radovan Karadzic had his sentence increased. 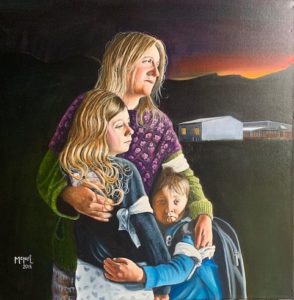 The narrative is:
A woman ethnically cleansed by the Serbs from the Prijedor area, protective of her children clutches a smashed photo of her once happy family, her only possession after being forced to sign over her home to the soldiers. They were ordered to wear white armbands because the Serbs couldn’t otherwise tell if they were Muslims. This of course made them targets for more abuse. Her husband is missing, likely taken to Omarska Camp for ‘questioning.’

The camp is shown in the background and features the infamous ‘White House’ where up to 150 prisoners (both men and women) were humiliated, tortured, sexually abused and murdered every day between 1992/3.

In 2000 Robert worked gathering evidence from many of the victims found in mass graves from this hellish place. Because of the horrific nature of the atrocities committed against them, it was the most sombre and upsetting deployment he was sent on.