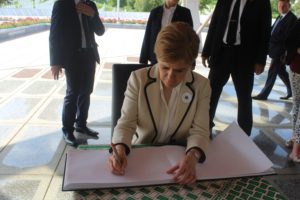 First Minister Nicola Sturgeon has led commemorations in Scotland to mark the 25th anniversary of the Srebrenica genocide.

Tomorrow, Saturday July 11, is a quarter of a century since the greatest atrocity on European soil since the Second World War.

The charity Remembering Srebrenica Scotland is holding a series of virtual events to spread the message about the crimes which took place in Bosnia and Herzegovina, including new education resources for Scottish school pupils.
In July 1995, Bosnian Serb forces led by General Ratko Mladić massacred 8,372 men and boys.

Twenty-five years on, there are still families searching for the bodies of their loved ones, and remains of those murdered which have been discovered and identified over the past year will be interred in a cemetery at Potacari, near Srebrenica, tomorrow.

But there is still denial about the atrocities which took place – a modern example of attempts to spread disinformation.

Due to the COVID-19 crisis, face-to-face commemorations have been cancelled, but events to mark the anniversary in Scotland include:
• A podcast series, ‘Srebrenica Stories’, featuring past charity delegates and those who lived or worked in Bosnia during the war.
• A special commemorative prayer written by Rt Rev Dr Martin Fair, Moderator of the General Assembly of the Church of Scotland, for congregations to use in their online worship this Sunday.
• New artwork by Scots portrait painter Iain Campbell who visited Srebrenica last year and met with survivors to paint them.
• A Scottish Parliament motion signed by nearly 40 MSPs, lodged by Anas Sarwar.
• An online discussion with Srebrenica survivor and acclaimed author, Hasan Hasanovic.

Remembering Srebrenica Scotland has organised 16 delegations to Srebrenica since it was established in 2015, with participants including First Minister Nicola Sturgeon and MSPs from all parties.

The charity is chaired by the Very Reverend Dr Lorna Hood, former Moderator of the Church of Scotland.
Remembering Srebrenica Scotland’s vision is a society free from hatred, and it works to achieve this goal by bringing communities together to remember Srebrenica through organising commemoration events in the UK; taking people on its ‘Lesson from Srebrenica’ visits programme to learn lessons from the survivors of the genocide; and developing an education resource for use in Scottish schools.

“I have had the enormous privilege to visit Srebrenica and meet survivors of the genocide as well as bereaved friends and family members who continue to this day to fight to preserve the memory of their loved ones.
“The pain and suffering they have endured is unimaginable but their determination and perseverance to carry on and create a better world, free from injustice and brutality, is nothing short of remarkable.
“Atrocities like the Srebrenica genocide do not occur overnight. When hatred and bigotry are allowed to seep into any part of society we are all at risk of a less peaceful and tolerant world.
“Although 25 years have passed since more than 8,000 men and boys had their lives taken from them – and many women and girls suffered appalling crimes of sexual violence – it is still vital that we remember and reflect on one of Europe’s darkest chapters.
“The Srebrenica genocide must never be forgotten and we must never allow the prejudice and intolerance that led to such brutality to infiltrate our society ever again.”

“Twenty-five years on from the genocide, there are still families searching for the bodies of their loved ones and there is still denial about the atrocities which took place.
“The truth about what happened must never be forgotten.
“What is important is not how this anniversary is remembered – but that it is remembered.
“Caught up with our present concerns and anxieties which are real and immediate, it is easy to relegate past tragedies and atrocities to the back of our minds. In so doing we lose sight of them altogether.
“As we know only too well, those who do not learn from history are doomed to repeat it. We remember Srebrenica not just for its sake but also for our own sakes.
“The lesson from Srebrenica is that no society is invulnerable to prejudice and intolerance.”

Rt Rev Dr Martin Fair, Moderator of the General Assembly of the Church of Scotland, said:

“Twenty-five years ago the world watched in horror at what unfolded across the Balkans generally and, particularly, at Srebrenica.
“Those who thought that such unthinkable extermination only happened elsewhere, or belonged in the history books, were shocked to see such scenes taking place in ‘civilised’ Europe.
“It was never more important than it is now that we remember what happened because it is so very easy to allow ourselves to slip in to the same dark places.
“Even now, there are divisive voices in our communities, doing their best to emphasise difference and to exploit what’s going on in the world for their own ends.
“These voices must not prevail which will require all people of goodwill to do more than be idle bystanders.
“In remembering Srebrenica, with deep shame and sadness, let us apply ourselves to working for reconciliations, understanding and peace in our world today.”

“The victims of the single worst atrocity on European soil since the Second World War were predominantly Bosnian Muslims.
“The incredible work of Remembering Srebrenica Scotland ensures they are not forgotten and that today’s generation of children in Scotland are taught about the genocide.
“The lessons of the events of 25 years ago are that we must continue to tackle hatred, racism and intolerance – wherever it is found.”